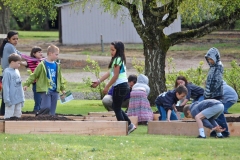 We had a lot of fun with the kids from the Monmouth-Independence YMCA who came out to the Rogue Farms Hopyard last week.

They’ll be regular visitors this summer. We built raised garden beds for them and they got to work right away digging holes and filling them with the plants they brought with them.

And then they saw the pigs…

They temporarily lost interest in planting when Voo and Doo came out to greet them.

We told them about Voo’s trip to the vet, so they were naturally drawn to her and asked a lot of questions. Voo is doing much better. We see progress every week. She’s starting to get excited again when we feed her. 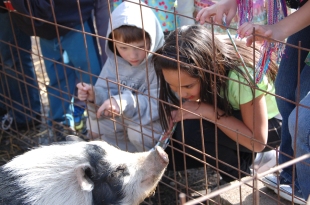 She’s quite the star. But Doo did not appear to be jealous.

It’s Oregon, so we had some rain. The kids improvised with our farm maps. 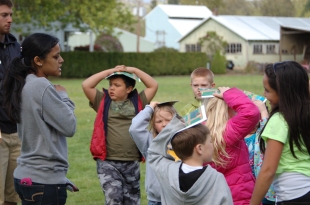 The Monmouth-Independence YMCA is building a community garden for the kids here at the Rogue Farms Hopyard. They’ll grow several kinds of veggies over the summer. Some of the veggies will go home with them and we’ll keep some to serve at the Chuck Wagon.

We hope they’ll have a better understand of where food comes from and the role of farms. We live by the grow your own philosophy at Rogue Farms. And we love sharing our ideas with the next generation.